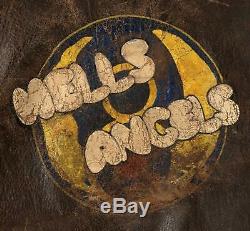 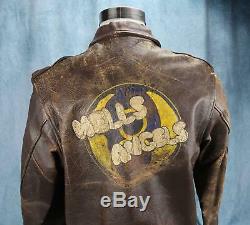 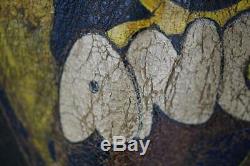 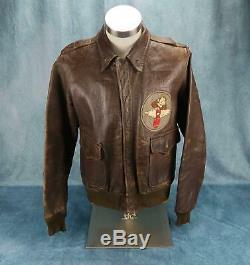 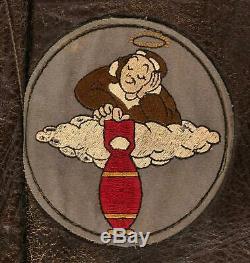 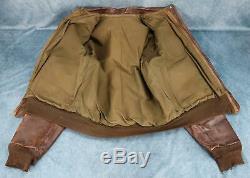 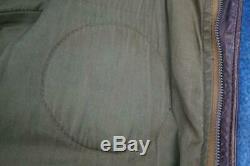 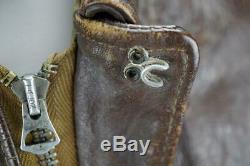 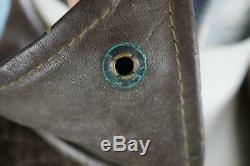 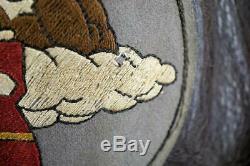 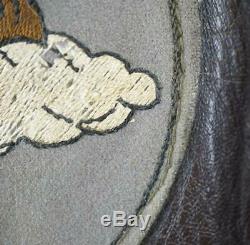 WW2 officer US Army Air Force Corp leather A2 bomber jacket USAF HELLS ANGELS. Here is your chance to own an incredible A-2 bomber jacket from the European Theater of Operations and from within a very famous unit. The airman that originally wore this iconic piece of aviation history was within the 303rd Bomb Group, 358th Bomb Squadron. The patch is heavily faded and portrays a bombardier wearing an angel's halo dropping a bomb from a cloud. The 358th Bomb Squadron patch is machine-sewn through the lining.

The "Talon" brand zipper and pocket snaps are fully functional. The jacket is hard worn but a desirable size and has the most impressive imagery.

A great looking A-2 in good overall condition and ready for your collection. As you know the famous motorcycle gang was formed after the war from remnants of the service and for all we know this could have been one of the founding fathers. Unfortunately the name tag has been lost to time and only the initials J.

Appear on the interior of the jacket. The 303rd Bombardment Group was first activated in February 1942. During World War II, the 303rd was one of the first VIII Bomber Command B-17 Flying Fortress units based out of England.

The group's "Hell's Angels" is recognized by the USAF as the first B-17 to complete 25 combat missions in the ETO on May 13, 1943, six days before the Memphis Belle. The group went on to fly more than 300 combat missions, more than any other B-17 group in the theater. The B-17 "Knock-out Dropper" was the first aircraft in Eighth Air Force to complete 50, then 75 missions.

The group was awarded the Distinguished Unit Citation for completing an attack against a heavily defended target in January 1944. The 303rd Bombardment Group was activated in February 1942 as a Boeing B-17 Flying Fortress heavy bomber group at Pendleton Field, Oregon and assigned within it was the 358th Bombardment Squadron. The group completed training by August 1942 and set sail aboard the RMS Queen Mary and arrived in Great Britain on 10 September before ferrying its planes across the Atlantic. It attacked Saint-Nazaire the following day, although its intended target was La Pallice. Its initial raids were on airfields, railroads and submarine pens in France.

As one of only four Flying Fortress groups in VIII Bomber Command during late 1942 and early 1943, the 303rd participated in the development of the tactics that would be used throughout the air campaign against Germany. In 1943, the group began flying missions to Germany, participating in the first attack by American heavy bombers on a target in Germany, a raid on the submarine yards at Wilhelmshaven on 27 January 1943. From that time, it concentrated primarily on strategic bombardment of German industry, marshalling yards, and other strategic targets, including the ball bearing plants at Schweinfurt, shipyards at Bremen and an aircraft engine factory at Hamburg.

The 303rd received a Distinguished Unit Citation when adverse weather on 11 January 1944 prevented its fighter cover from joining the group, exposing it to continuous attacks by Luftwaffe fighters. Despite this opposition, the unit successfully struck an aircraft assembly plant at Oschersleben. Although a strategic bombing unit, the squadron was diverted on occasion to close air support and interdiction for ground forces. It attacked gun emplacements and bridges in the Pas-de-Calais during Operation Overlord, the invasion of Normandy, in June 1944; bombed enemy troops during Operation Cobra, the breakout at Saint Lo, and during the Battle of the Bulge.

It bombed military installations near Wesel during Operation Lumberjack, the Allied assault across the Rhine. Its last combat mission was an attack on 25 April 1945 against an armament factory at Pilsen.

Following VE Day in May 1945 the 303rd Group was reassigned to the North African Division, Air Transport Command and moved to Casablanca Airfield, French Morocco to use its B-17 bombers as transports, ferrying personnel from France to Morocco. However, the two B-17 groups moved to Casablanca proved surplus to Air Transport Command's needs and the squadron was inactivated in late July 1945 and its planes ferried back to the United States. During the War, the 303rd flew 364 missions, more than any other Eighth Air Force B-17 group, and one group Fort, "Hell's Angels", was the first to complete 25 missions.

I never grade my items as mint, even though may be. If for any reason you require additional photos, please do not hesitate to ask. View My Other Items For Sale.

Get images that make Supersized seem small. Tailor your auctions with Auctiva's. The item "WW2 officer US Army Air Force Corp leather A2 bomber jacket USAF HELLS ANGELS" is in sale since Wednesday, February 26, 2020. This item is in the category "Collectibles\Militaria\1919-38\Original Period Items".