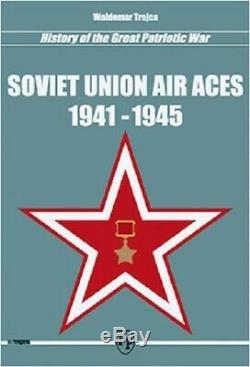 This very large book is the first in a new series, History of the Great Patriotic War. It will cover 381 pilots, their wartime careers (including the Russo-Finnish War and the War against Japan in the East), their aircraft and the decorations they were awarded, especially the Hero of the Soviet Union.

Their contribution must be recognized. Also included is a color map that shows all Russian and German air units on 22 June 1941. All books are entirely in English unless noted otherwise.

International orders billed at cost. Hand me a book and I'll tell you straight off if it's a bookclub edition. Sometimes it can be hard for most booksellers to know if it's a bookclub, like university press books. They don't normally put the price on the jacket for the publisher's edition, but most of them do use full or partial cloth binding, whereas the bookclub edition will be simply cheap board covers. Though let's face it, most of the publisher's editions these days aren't all that great in quality either, the bookclubs are even worse!

The item "HISTORY OF THE GREAT PATRIOTIC WAR SOVIET UNION AIR ACES 1941-1945" is in sale since Monday, December 9, 2019. This item is in the category "Books\Nonfiction".