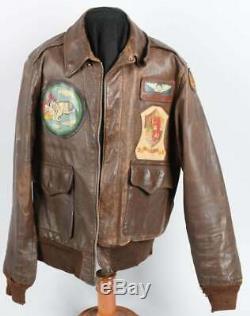 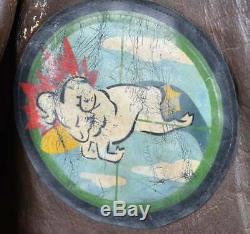 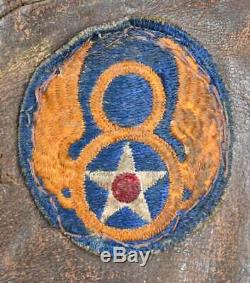 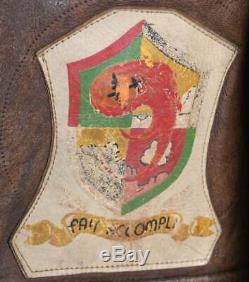 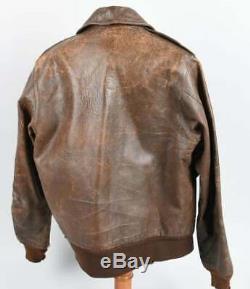 WWII US Army Air Corps A-2 flight jacket identified to Airman Felix Kramer of the 457th Bomb Group of the 751st Bomber Squadron of the 8th Air Force. Jacket is still in excellent condition still retaining the original cuffs and waistband with minor wear. Jacket is missing the original contract label but still has the size tag of 38. Jacket is quadruple patched having two squadron insignias to the front of the 457th Bomb Group and the 751st Bomber Squadron. The front of the jacket also has his multi layered leather name tape with a blue background Air Crew wings.

The blue background indicated combat actions with the Eighth Air Force. On the right shoulder is a 8th Air Force shoulder patch.

Jacket is in excellent condition with it's original fully functioning Talon Zipper. World War II Training in the United States The 447th Bombardment Group was activated at Geiger Field, Washington on 1 July 1943 with the 748th, 749th, 750th and 751st Bombardment Squadrons assigned. It moved a week later to Rapid City Army Air Base, South Dakota, where it began training with the Boeing B-17 Flying Fortress heavy bomber and completed the first two phases of its training there. It completed its training at Ephrata Army Air Base, Washington, then moved to Wendover Field, Utah for final preparation for overseas movement. It departed for the European Theater of Operations on New Years Day, 1944. Combat in Europe The group assembled at its combat station, RAF Glatton by the end of the month. The air echelon had begun arriving at Glatton on 21 January. The group flew its first mission during Big Week on 21 February 1944, as Eighth Air Force concentrated its attacks on Germany's aircraft manufacturing industry.

It engaged primarily in the strategic bombing campaign against Germany, attacking ball bearing plants, oil refineries and aircraft factories until June 1944. On 2 November 1944, the 457th and another group strayed from the main bomber stream and its fighter cover. Luftwaffe fighter controllers directed a geschwader of interceptors against the formation.

Nine of the 457th Group's Flying Fortresses were lost to this attack. In June 1944, the group was diverted from its strategic mission to prepare for Operation Overlord, the invasion of France. On D Day, it attacked coastal defenses on the Cherbourg Peninsula. For the remainder of the month it was engaged in air interdiction, striking airfields, rail systems and roads and depots behind enemy lines.

The group was also diverted to tactical targets for shorter periods. In July 1944, it supported Operation Cobra the breakout of ground forces at Saint Lo. During Operation Market Garden, the attempt to secure bridgeheads across the Rhine River in the Netherlands, it supported the British 1st Airborne Division.

It provided similar support during the Battle of the Bulge in December 1944 and January 1945, and Operation Varsity, the airborne assault across the Rhine in March 1945. The group flew its last combat mission on 20 April 1945. In fourteen months in combat, the group had flown 7086 sorties. It claimed the destruction of 33 enemy aircraft, but lost 83 Flying Fortresses. Following V-E Day, it transported prisoners of war from Austria to France.

The air echelon departed Glatton between 19 and 23 May, while the ground echelon sailed on the RMS Queen Elizabeth on 24 June, arriving at the New York Port of Emarkation five days later. [4] It assembled at Sioux Falls Army Air Field, South Dakota in late July. It was inactivated there the following month.

The B-25 exploded on impact spraying burning fuel into 34th Street below, one of the engines completely passing through the building and out the other side. The item "WWII WW2 UNITED STATES ARMY AIR CORPS ID'ED PATCHED BOMBER JACKET" is in sale since Thursday, April 9, 2020. This item is in the category "Collectibles\Militaria\WW II (1939-45)\Original Period Items\United States\Photographs".

The seller is "conmarxx" and is located in Corona, California. This item can be shipped worldwide.