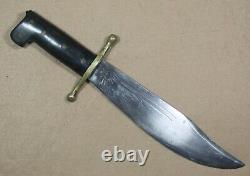 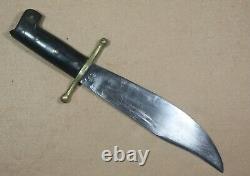 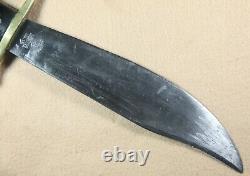 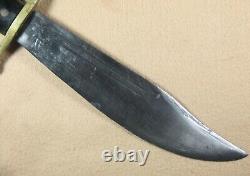 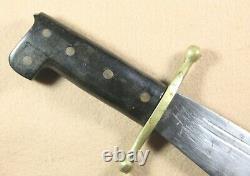 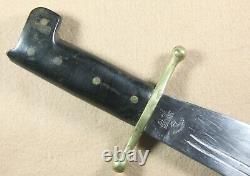 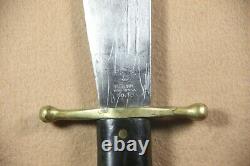 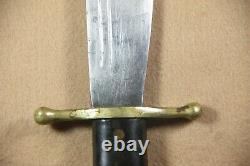 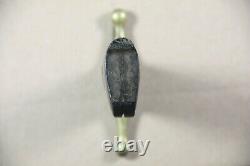 18 USMC RAIDER "GUNG HO" FIGHTING KNIFE or ARMY AIR CORPS SURVIVAL KNIFE. This knife (Collins Company called them "machetes") is either: (A) possibly one of the extremely rare Collins No. 18 Fighting Knives made for the 2nd Marine Raider Battalion - the so-called "Gung Ho" Knives - during the summer of 1942; or (B) one of the 5,000 Collins No. 18s made for the Army Air Corps as bail-out Survival Knives during the fall of 1942. Collins Company completely ran out of green cattle horn for the handles while filing the "Gung Ho" order, so the last part of that order was filled with knives just like this one, with black plastic handles.

And, of the 1,000 No. 18s made for the "Gung Ho" order, only about 900 - the knives initially issued to individual Raiders - were numbered on their blades, so it is remotely possible this knife is one of them. If not, it is one of the 5,000 Army Air Corps Survival Knives - many of which were robbed from aircraft bail-out survival kits and traded to Marines and Army infantrymen to use as fighting knives. Since the un-numbered, black plastic handled "Gung Ho" Knives and the Army Air Corps Survival Knives are identical, it is impossible to tell which it is. But, either way, it is a rare knife and judging from its condition as shown in the accompanying photos, it saw hard service during WWII.

Sorry, there is no sheath. The item "WWII COLLINS NO. 18 USMC RAIDER GUNG HO KNIFE or ARMY AIR CORPS SURVIVAL KNIFE" is in sale since Sunday, October 18, 2020. This item is in the category "Collectibles\Militaria\WW II (1939-45)\Original Period Items\United States\Edged Weapons". The seller is "idhusmc" and is located in McKinney, Texas.