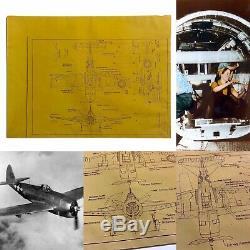 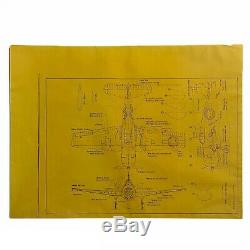 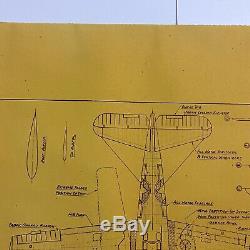 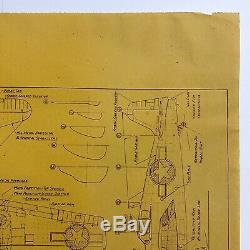 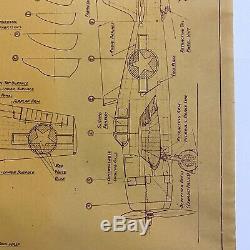 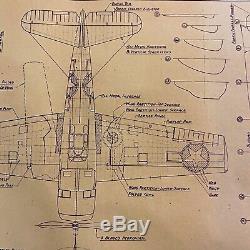 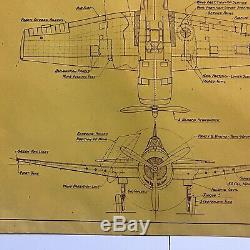 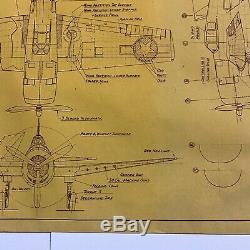 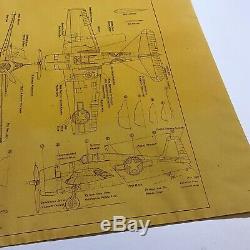 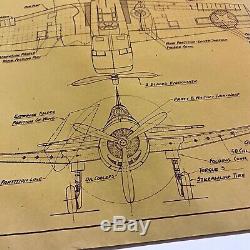 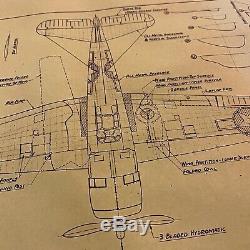 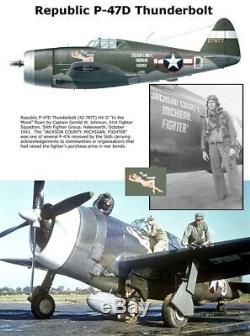 Size: 24 x 18 inches. These original WWII Republic P-47 Thunderbolt blueprints are not dated, however, come from a collection of 3 other similar aircraft blueprints of the same collection that are dated August of 1944. The paper of all three blueprints show similar aging and are drawing in the exact style of the one blueprint that is dated 1944. This blueprint shows the factory and construction layout plans and specifications for one of the most notable US fighter aircrafts used in all theater operations during WWII. The blueprint is in good condition with little to no folds as it was never creased.

Paper shows common age and has a yellowish tint with a blue printed ink. The Republic P-47 Thunderbolt was a World War II-era fighter aircraft produced by the United States from 1941 through 1945.

Its primary armament was eight. 50-caliber machine guns, and in the fighter-bomber ground-attack role it could carry five-inch rockets or a bomb load of 2,500 pounds (1,133 kg). When fully loaded, the P-47 weighed up to eight tons, making it one of the heaviest fighters of the war.

The P-47 was designed around the powerful Pratt & Whitney R-2800 Double Wasp engine, which was also used by two U. Marine Corps fighters, the Grumman F6F Hellcat and the Vought F4U Corsair. The Thunderbolt was effective as a short-to medium-range escort fighter in high-altitude air-to-air combat and ground attack in both the European and Pacific theaters.

By the end of 1942, P-47Cs were sent to England for combat operations. The initial Thunderbolt flyers, 56th Fighter Group, was sent overseas to join the 8th Air Force. As the P-47 Thunderbolt worked up to operational status, it gained a nickname: the "Jug" (because its profile was similar to that of a common milk jug of the time).

Two Fighter Groups already stationed in England began introducing the Jugs in January 1943: the Spitfire-flying 4th Fighter Group, a unit built around a core of experienced American pilots who had flown in the RAF Eagle Squadrons prior to the US entry in the war; and the 78th Fighter Group, formerly flying P-38 Lightnings. The first P-47 combat mission took place 10 March 1943 when the 4th FG took their aircraft on a fighter sweep over France. The mission was a failure due to radio malfunctions. All P-47s were refitted with British radios, and missions resumed 8 April.