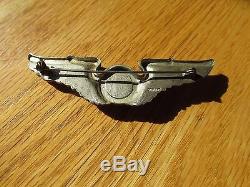 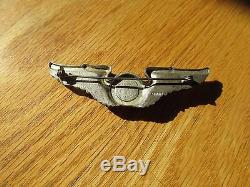 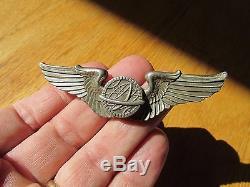 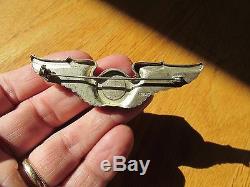 NAVIGATOR wing ; Full size 3 inch sterling , pin back. Three piece construction , no maker marks. This wing looks like it was made from an observer wing with the navigating World device attached by the maker. A really nice wing, heavy sterling Silver [0.925 fine] , this wing would have been worn by a Bomber plane Navigator on one the US Army Air Force bombers like 8th Air Force B24 & B17 or 9th air Force B26 & B25.

Any Navigator in the AAF would have worn one of these on their Jacket or shirt. 100 % real and very nice. Pin back 3 inch full size.

The item "WW2 US Army Air Force Navigator wing pin back Sterling 3 inch USAAF" is in sale since Wednesday, July 19, 2017. This item is in the category "Collectibles\Militaria\WW II (1939-45)\Original Period Items\United States\Pins".