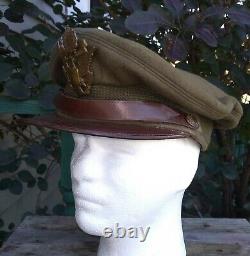 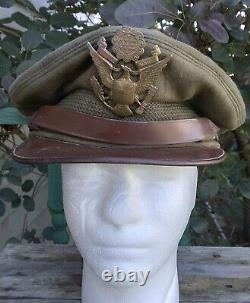 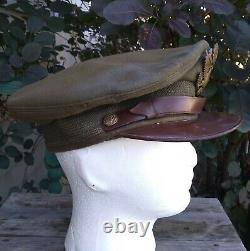 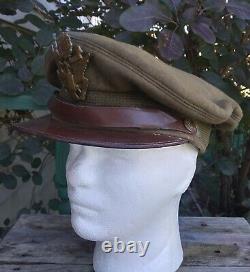 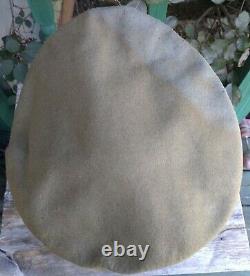 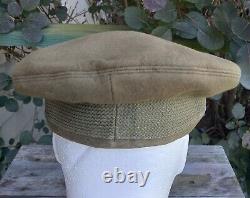 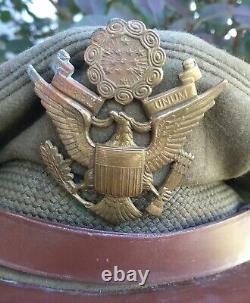 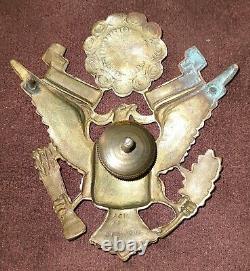 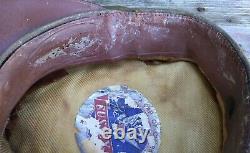 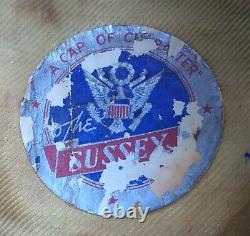 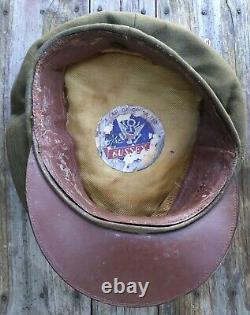 In 1926 the United States Army adopted a new service hat to go with the new M1926 service uniform. This hat resembled that which was worn during the first World War, and featured a body made of olive drab wool, a russet visor and chinstrap, and a gilt officers emblem. Unlike the enlisted model which was not authorized after 1941, the officers model continued to be worn throughout the war. Nice salty example of the World War II officer's visor hat.

This one utilizes the classic "doe skin" quality wool body, and is complete with a correct "ACID TEST/GEMSCO" officers insignia on the front. The stiffener of the hat has been removed, giving the hat a wonderful saddle shape that was very popular with the Army Air Forces - especially for those that wore headphones. The paper sweat guard for the crown of the hat is mostly gone, allowing us to see the manufacturers label that reads, "A Cap of Character/ The Sussex". This one came out of an estate in Syracuse, New York. This one is on the salty side, so keep that in mind.

This would be perfect for a uniform in similar condition, or would also look great in a cabinet with other officer effects for display. The hat remains in fair condition, showing ample signs of age, use, and wear. The visor, especially on the crown, shows significant fading from sun exposure. There is also some white residue noticeable along the woven band that goes around the circumference of the hat, as well as within the recesses and crevices. Leather shows some drying, but is still structurally sound. Minor insect damage might be evident. The visor is a bit misshapen, as is the band that fits around the head. This will fit on a mannequin head, but does need some reshaping for a better fit. The sweatband shows significant wear from actual use, and while the band is securely in place, it does appear to be missing some stitching. The interior paper crown protector is mostly gone.

The officer's insignia shows some green verdigris and oxidation, is slightly out of shape, and one of the prongs that secures it to the hat in missing. Please see the pictures for more detail.

This item is guaranteed 100% authentic in every respect for life. Be sure to see our other listings for more historical antiques and militaria. Be sure to follow our store as new inventory is added daily. The item "World War II Officer's Service Hat Cap Army Air Force AAF WWII WW2" is in sale since Wednesday, September 29, 2021. This item is in the category "Collectibles\Militaria\WW II (1939-45)\Original Period Items\United States\Hats & Helmets". The seller is "historical_antiques" and is located in Greenville, Pennsylvania. This item can be shipped to United States.