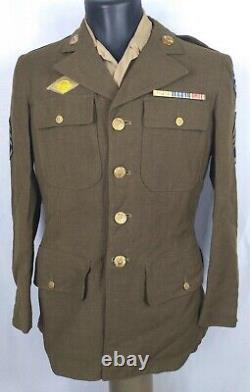 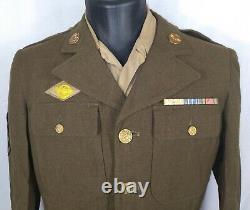 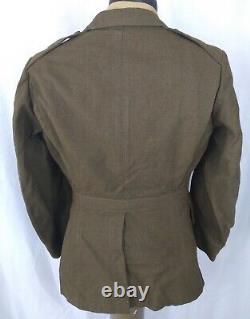 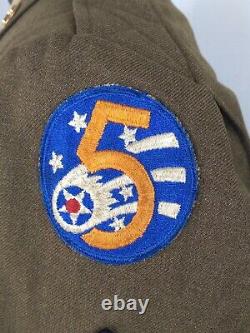 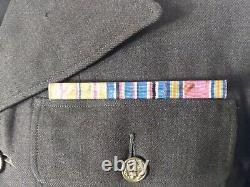 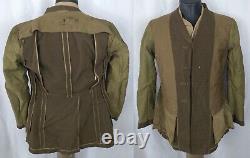 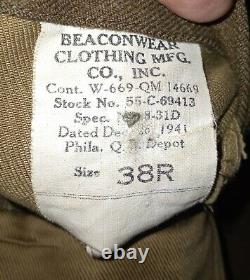 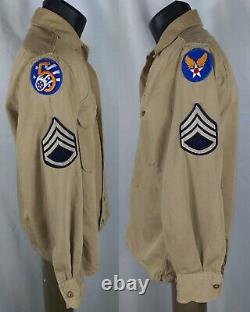 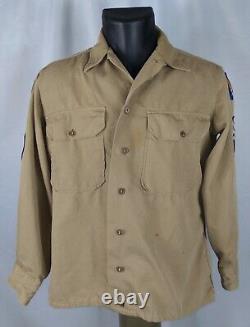 Wonderful World War II M1939 Winter Service Coat and shirt that belonged to a Staff Sergeant with the US 5th Army Air Force during WWII. The coat itself was manufactured by the BEACONWARE CLOTHING MFG. INC in December of 1941 for the Philadelphia Quartermaster Depot, and is a size 38R (found on the spec label). The left shoulder features a nice 5th Army Air Force shoulder sleeve insignia, which is machine sewn to the sleeve. Both sleeves feature correct rayon embroidered on felt chevrons, indicating the rank of Staff Sergeant. The lapels have correct, albeit mismatched collar brass. The right collar features a "US" collar brass, of the type with the brass post base, which are generally considered late or post war manufacture. (after the strategic metals ban on brass was lifted). The left collar features a nice WWII winged propeller collar brass, which represents the US Army Air Forces. The left breast features a three-place ribbon bar, representing the following awards: Asiatic-Pacific Campaign Medal, American Campaign Medal, and WWII Victory Medal (ribbon bars only, no medals included). The right breast features the WWII Honorable Discharge Emblem ("Ruptured Duck"), which is machine-sewn to the uniform.

This is actually the tan summer pattern, which was designed for the summer khaki cotton shirt. In practice, Ruptured Ducks appear on the winter service uniform in both olive drab and khaki (they likely used whatever was on hand). The inside of the coat has a few different laundry numbers present, making identification a possibility. Presently, I do not have any information on the previous owner. The uniform also comes with the summer cotton khaki shirt, as worn with the Class B uniform.

The right sleeve features a World War II period 5th Army Air Force shoulder sleeve insignia, while the left sleeve features the US Army Air Forces Headquarters patch - both of which are machine-sewn to the sleeves. When we found the uniform, the shirt was soiled to the point that we decided that it was best to wash the shirt. Normally we offer things in "as found" condition, but this one was an exception by necessity. As such, there is still some residual staining on the shirt, but most importantly - the patches on the shirt will fluoresce under a black light (which is a result of washing). The uniform remains in good condition, showing signs of age, use, and wear.

A moth hole was found near the top right pocket, as well as a few other areas of minor insect damage. The shirt shows ample signs of age, use, and wear. Some fading, sweat stains, and stains on the front from soiling is evident. One button seems to have been replaced. The plastic covering over the Victory Medal ribbon bar is torn and partially missing.

Please see the pictures for more detail. Guaranteed 100% authentic in every respect for life. Be sure to see our other listings for more historical antiques and militaria. Be sure to follow our store as new inventory is added daily.

And last, but certainly not least, Fifth Air Force assists in the mutual defense of Japan and enhances regional stability by planning, exercising, and executing joint air operations in partnership with Japan. To achieve this mission, Fifth Air Force maintains its deterrent force posture to protect both U. And Japanese interests, and conducts appropriate air operations should deterrence fail. Fifth Air Force is commanded by Lieutenant General Ricky Rupp.

Fourteen Boeing B-17 Flying Fortress that survived the Battle of the Philippines left Mindanao for Darwin, Australia, between 17 and 20 December 1941, the only aircraft of the Far East Air Force to escape. After its evacuation from the Philippines on 24 December 1941, FEAF headquarters moved to Australia and was reorganized and re-designated 5 Air Force on 5 February 1942, with most of its combat aircraft based on fields on Java. It seemed at the time that the Japanese were advancing just about everywhere. The remaining heavy bombers of the 19th Bombardment Group, based at Malang on Java, flew missions against the Japanese in an attempt to stop their advance.

They were joined in January and February, two or three at a time, by 37 B-17Es and 12 LB-30s of the 7th Bombardment Group. The 7th Bombardment Group was withdrawn to India in March 1942, leaving the 19th to carry on as the only B-17 Fortress-equipped group in the South Pacific. About this time it was decided that replacement B-17s would not be sent to the southwest Pacific, but be sent exclusively to the Eighth which was building up in England.

By May, Fifth Air Force's surviving personnel and aircraft were detached to other commands and the headquarters remained unmanned for several months, but elements played a small part in the Battle of the Coral Sea (7-8 May 1942) when the 435th Bomb Squadron of the 19th Bomb Group saw the Japanese fleet gathering in Rabaul area nearly two weeks before the battle actually took place. Because of the reconnaissance activity of the 435th Bomb Squadron, the US Navy was prepared to cope adequately with the situation. The squadron was commended by the US Navy for its valuable assistance not only for its excellent reconnaissance work but for the part played in the battle. Headquarters Fifth Air Force was re-staffed at Brisbane, Australia on 18 September 1942 and placed under the command of Major General George Kenney. United States Army Air Forces units in Australia, including Fifth Air Force, were eventually reinforced and reorganized following their initial defeats in the Philippines and the East Indies.

At the time that Kenney had arrived, Fifth Air Force was equipped with three fighter groups and five bombardment groups. Fifth Air Force engaged the Japanese again in the Philippines Campaign. FEAF was subordinate to the U. Army Forces Far East and served as the headquarters of Allied Air Forces Southwest Pacific Area.

By 1945, the three numbered air forces were supporting operations throughout the Pacific. FEAF was the functional equivalent in the Pacific of the United States Strategic Air Forces (USSTAF) in the European Theater of Operations. When the war ended, Fifth Air Force had an unmatched record of 3,445 aerial victories, led by the nation's two top fighter aces Major Richard Bong and Major Thomas McGuire, with 40 and 38 confirmed victories respectively, and two of Fifth Air Force's ten Medal of Honor recipients. Shortly after World War II ended in August, Fifth Air Force relocated to Irumagawa Air Base, Japan, about 25 September 1945 as part of the allied occupation forces.

This item is in the category "Collectibles\Militaria\WW II (1939-45)\Original Period Items\United States\Uniforms". The seller is "historical_antiques" and is located in this country: US. This item can be shipped to United States.