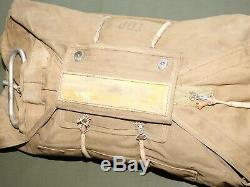 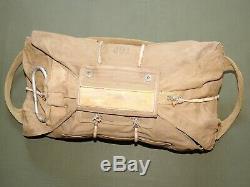 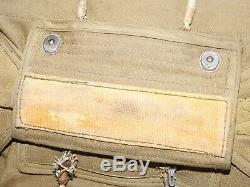 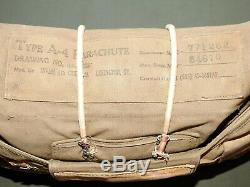 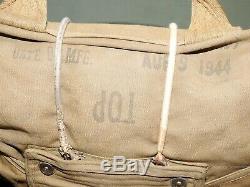 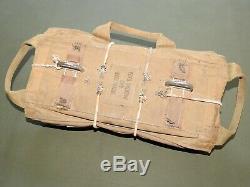 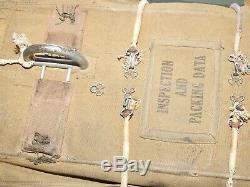 The 8th Air Force was the most potent arm of American air power during WW2, tasked with the strategic bombing campaign against Germany. Flying B-17 and B-24 heavy bombers with P-51 Mustang fighter escorts, the "Mighty Eighth" swept the vaunted Luftwaffe from the skies in epic air battles over Occupied Europe. By the end of 1944, the 8th Air Force was using 4 different Quick Attachable Chest (QAC) parachute harnesses and at least 5 types of chest packs.

A mistake in pairing a harness with the proper pack could prove fatal, necessitating the use of two color coded groups (red and yellow) for sure identification of matching components at a glance. These QAC chest packs in either "red group" or "yellow group" were worn by 8th Air Force pilots and air crews on their perilous missions to knock out German industry. This US Army AAF WW2 8TH AIR FORCE PILOT "YELLOW GROUP" QAC A-4 CHEST PARACHUTE PACK is in very good condition, MISSING THE CANOPY, having been filled with bubble wrap for display, and with the "male" portion of the right "lift-the-dot" of the middle front flap having not been pushed all the way through the "female" portion, rendering it difficult to manipulate and thus non-functional, some fraying under the "female" portion of the left "lift-the-dot" of that middle front flap, also rendering it difficult to manipulate and thus non-functional, some scattered small surface tears around the back. Some scattered patina to the metal hardware throughout.