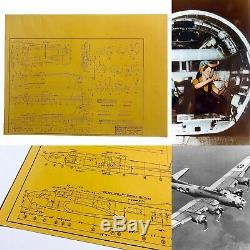 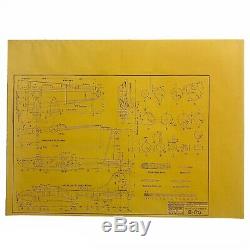 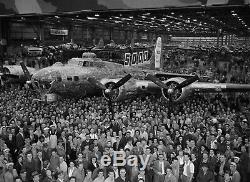 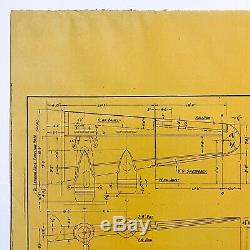 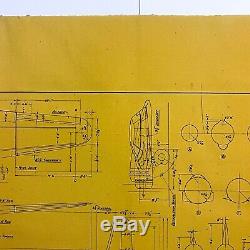 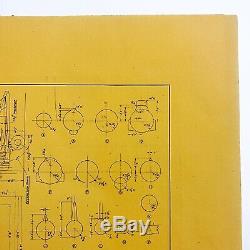 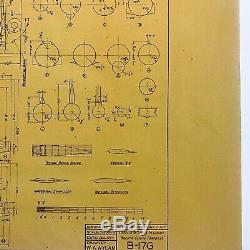 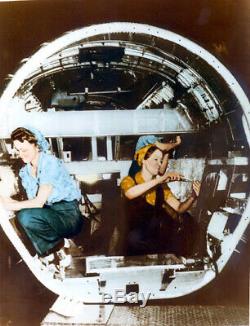 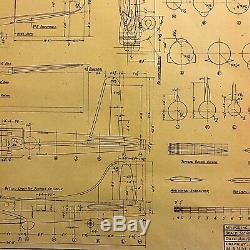 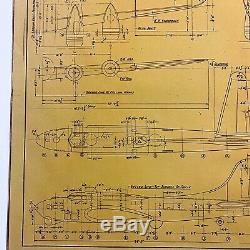 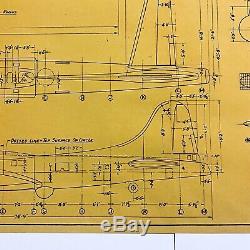 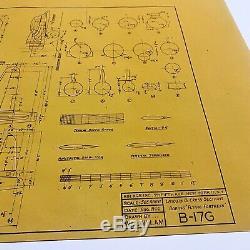 Size: 24 x 18 inches. These original WWII Boeing B-17 Flying Fortress blueprints are dated August of 1944 and show the factory and construction layout/cross specifications for one of the most notable bombing aircrafts used in the European Theater.

The blueprint is in good condition with little to no folds as it was never creased. Paper shows common age and has a yellowish tint with a blue printed ink.

B-17, also called Flying Fortress, U. Heavy bomber used during World War II. The B-17 was designed by the Boeing Aircraft Company in response to a 1934 Army Air Corps specification that called for a four-engined bomber at a time when two engines were the norm. The bomber was intended from the outset to attack strategic targets by precision daylight bombing, penetrating deep into enemy territory by flying above the effective range of antiaircraft artillery. Turbo-supercharged radial engines (a uniquely American development) were to give the necessary high-altitude performance, and heavy defensive armament was to provide protection against attacking fighters. Accuracy was to be achieved with the Norden bombsight, developed and fielded in great secrecy during the 1930s. The Norden consisted of a gyroscopically stabilized telescopic sight coupled to an electromechanical computer into which the bombardier fed inputs for altitude, atmospheric conditions, air speed, ground speed, and drift. During the bomb run, the sight was slaved to the automatic pilot to guide the aircraft to the precise release point.

In the hands of a skilled bombardier, the Norden was a remarkably accurate sight. The first prototype bomber flew in mid-1935, and the B-17 entered small-scale production in 1937. Early versions proved to be more vulnerable to fighter attack than anticipated, but, by the time the B-17E version began to go into service shortly before the United States entered the war in 1941, the plane was equipped with turrets in the upper fuselage, belly, and tail.

All but the last turret were power-operated, and each mounted a pair of 0.50-calibre (12.7-mm) machine guns. This increased firepower made the B-17 a formidable opponent for enemy fighters, particularly when flying in tightly stacked defensive formations for mutual protection.

The basic element of a typical formation was a squadron box of 9 or 12 aircraft; three squadron boxes staggered vertically and horizontally formed a group, and three groups in trail formed a combat wing. In the event, the need to keep such tight defensive formations over Europe compromised the accuracy of the Norden bombsight, since individual bomb runs were not possible without breaking the formation. Whole bomb formations had to drop their loads on the lead bombardiers command, and the inevitable small differences in timing and heading led to dispersed bomb patterns. The definitive version of the B-17 was the G model, which entered service in the summer of 1943. Armed with no less than 13 0.50-calibre machine guns, including two in a new chin turret for defense against head-on attack, the B-17G fairly bristled with machine guns.

It was operated by a crew of 10, including the pilot, copilot, navigator-radioman, bombardier, and gunners. The planes service ceiling of 25,000 to 35,000 feet (7,500 to 10,500 metres), depending on the bomb load, put it above the worst of the German antiaircraft artillery, but, firepower notwithstanding, formations of B-17s proved unable to fight their way unescorted to targets deep inside Germany in the face of determined fighter opposition without incurring excessive losses. Deep raids were called off in mid-October 1943 and were not resumed until February 1944, when long-range escort fighters such as the P-51 Mustang became available. A 4,000-pound (1,800-kg) bomb load was typical for long missions, though the B-17 could carry up to 8,000 pounds (3,600 kg) internally for shorter distances at lower altitudes and even more on external racks beneath the wings.